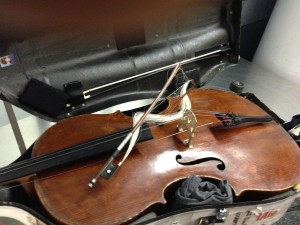 I am travelling internationally since almost 25 years, hopping back and fourth between continents, and as I am a rather trusting person in possession of a very strong cello case (Alan Stevenson), I am one of the few cellists who travels without an extra seat for the cello – I check my poor Goffriller with the suitcases. Twice my cello got damaged, and that was when I had a second ticket: the case fell under my supervision; nothing major, little crack which was easily be glued, but absolutely my fault. The baggage handlers never did any harm to it.

Until February 6 2013: I left Berlin via Brussels and Chicago to rehearse Prokofievs Cellosymphony in Madison, WI, but when my flight Brussels-Chicago got cancelled I knew this was not my day. Re-routed via Washington I was going to arrive just at the end of my only rehearsal for that tricky piece. The orchestra gracefully agreed to pick me up by car from Chicago Airport which was going to give me at least half an hour with the Madison Symphony (at 4:30 am Berlin time…). Upon my arrival at Washington Dulles Airport I routinely checked that the cello had survived the trip until now – it was even better in tune than after a performance of the Cellosymphony! Something inside me told me I should try to get it through security and check it at the gate, but as I absolutey hate confrontation with anybody, especially airline and security officials, I opted for the normal recheck and gave my cello to one of the baggage handlers who promised to take great care of it.

In Chicago I had to wait for more than 40 minutes until I finally received the cello, fifteen minutes after the suitcase had arrived. MY fatigue disappeared at once after opening my treasured cello case: the cello seemed alright, but my beloved Heinrich-Knopf-bow stuck half in its mounting, the other half, broken off, only tied together by the hair, was dangling around the fingerboard, a shocking and rather surreal picture. A bad curse came from my exhausted lips and the United Airlines officials knew they were in for some tough time with this little, angry, pale German cellist trying to explain to them that the bow is actually what counts most for a string player and loosing one’s bow means almost loosing one’s voice.

I was never attached to any cello in my life, but the bows I played on in the past 12 years I grew as fond of as I have never done to any object in my life before. My first good bow I bought for the cost of a (very nice) Mercedes in 2001. I never thought I would spend that kind of money on a bow, but after trying it in New York I instantly fell in love; I felt I had found my voice. When it broke in a concert couple of months later a world collapsed around me instantly, and even though it had broken at the tip where it could be fixed, I had nightmares from that day on that it could happen again. The value was lost anyway (a broken bow is like a stamp – once broken it’s pratically worthless, even though it might play as well as before), but I felt my cello playing depended on it. When it broke for the third time last April during a dress rehearsal of the Dvorak Concerto with the Hallé Orchestra (5 minutes later my substitute bow broke at the same place, absolutely unheard of!), the bowmaker, who had repaired it the previous times, told me that now there was no chance for another repair – it needed a new tip which might alter the sound for ever. But he was able to sell me a wonderful old German bow (by Heinrich Knopf) which he had altered a bit to make it more similar to my beloved broken bow (by Nikolaus Kittel, who might not ever have built bows himself but bought sticks from other makers, bending them in a different way before putting his stamp on them. Among his distributors were: Heinrich Knopf!), et voilá, the bow played as beautifull if not even better than my “Kittel”.

But what happened to the Knopf on February 6?! The TSA (Transportation Security Agency) in Washington, DC, not trusting the X-Ray-image felt the need to open the case. They took the cello out in my absence, put it back in, carelessly detaching the bow partly from its mounting and finally slamming the case shut, in the process breaking the bow right in the middle of the bridge of the cello. Quite a miracle the cello didn’t implode under that stress. How do I know they opened the cellocase? They were stupid enough to slip a “notice of baggage inspection” into the case!