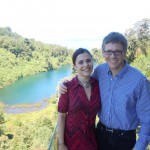 With Gergana in Chile

Sitting in a train, dashing back from my last concert in order to spend a bit of late-night-time with my son, always gives me the opportunity to get some work done. Answering e-mails, returning calls, or, as rather sedlomly recently, writing my little diary here. I know, I should just translate the monthly blog I am writing for this music magazin “Fonoforum” in German, but this would take much more time than writing something new – at the same time it’s kind of boring writing twice about what happened in the past few weeks which is the reason I have almost stopped posting something here.

Where shall I start? So many concerts in the past few weeks, and each time a different piece, a real marathon which culminated in the time between Jan 28 and Feb 16, when I played in Antwerpen and Brügge Britten’s gorgeous Cellosymphony with the Royal Flemish Philharmonic Orchestra under Otto Tausk (last concert a 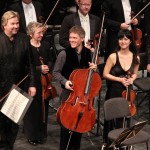 With Ari Rasilainen and Hyeyoon Park in Hof

radio broadcast, scary with a difficult and rarely played piece like that…), few days later with the excellent Ari Rasilainen Brahms Double in Hof (no, Ari was the conductor, the fiddle was played very well by Hyeyoon Park), me commuting back and fourth the 190 miles between Hof and Berlin to see a bit of János during these busy times, and directly afterwards I recorded in four sessions (what a luxury, thank you, Hyperion!!!) Richard Strauss’ Don Quixotte with the orchestra which premiered the piece many years ago, the Gürzenich Orchestra Cologne with their wonderful music director Markus Stenz. The same night I made my way, luckily joined by my very soon to be wife Gergana from Cologne via Frankfurt, Sao Paulo, Santiago de Chile to Frutillar where I had to play both Haydn Concerti with a local chamberorchestra – because of a strike by Air France (who else?!) it took us 29 instead of 22 hours, but there we were in heaven, unfortunately only for three days, returning straight back to Berlin because I had to play the day after the Dvorakconcerto in Nuremberg with the Nürnberg Philharmonic and their new music director Marcus Bosch. I took my little patch-work family with me because it was the end of János’ winter holidays, and to avoid him sitting around at his mother’s watching TV or playing playstation, I thought he would enjoy seeing Nuremberg, listening to some nice Dvorak, watching Star Wars in a 3D cinema, and as little highlight two days of skiing in the beautiful Erzgebirge, right at the Czech border, about 200 miles South of Berlin. Needless to say we had a blast! Geri learned how to ski really well in our little trip to Switzerland over New Year, and now she even managed to do some adorable parallel swings 🙂 And János is a pro anyway!

Did I mention that I am sitting in a train? Well, it’s my journey back home from my first concert with the orchestra in Cottbus, a small town near the Polish border, not even 100 miles east of Berlin, with the most beautiful little art nouveau opera house I have ever seen. I did Britten again, but even though I have played it three weeks ago, it doesn’t really get much easier I must admit. Especially playing by heart I find it extremely hard and dangerous to get lost. The orchestra did a very good job, except the beginning of the slow movement, when the timpanist played the first two bars in half speed, subsequently lost the conductor Rasmus Baumann. I, waiting for my “cue”, waited for him to finish his introductory notes while the strings came rightfully at the fourth bar… little mishap, doesn’t matter, but I was angry with myself because I couldn’t just ignore the poor lost timpanist and come in when everybody else was coming in. As János wanted to stay with me over the weekend (we are celebrating his 13th birthday a bit belated tomorrow with a big party) I had reserved a taxi for 8:55 pm at the artist entrance to be able to catch my train back to Berlin at 9:02 pm – and I made it!

Why on earth did I go through the pain of travelling 29 hours to Patagonia (South of Chile)for only three days? It’s a long story, but I’ll try to make it short: A good friend of mine, Uli Bader, himself a cellist, Berlin boy like me, same neighbourhood, had not only invited me twice to his orchestra, the National Symphony in Washington of which he was artistic administrator, but had also told other orchestras to take the huge risk and hire me which some of them did. 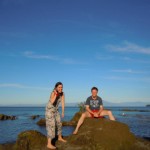 With Gergana in Frutillar (Chile)

I felt rather grateful, and when he asked me to play at his wedding after leaving the orchestra to marry this wonderful woman who lives in Chile, I agreed to fly there. When I saw what they were doing there, I vowed to come again for the opening of – their hall! Yes, her family, or better, her father had started to build a concert hall right into this huge lake but had died before finishing it. Uli with his drive continued the work of his late father-in-law and together with his wife Nicola they finished this not so little theatre “Teatro del Lago” about 15 months ago. I was supposed to play the Dvorak for the grand opening but because of some misunderstandings I ended up being double-booked at the same time with the Cleveland Orchestra. Uli gracefully understood that this was quite an important concert to cancel so he let me out of my comitment. But since then we were looking for a spot when I could come and play in his concert hall which, as I can truthfully state now, is absolutely gorgeous, acoustically as well as aesthetically. As he also needed a chamberconcert he had hired Gergana’s Trio Imàge which played an excellent concert at the 300-seat amphitheatre, the chambermusic hall with the most unique view in the entire world: behind the scene, through a huge glass wall, you have the full view of this gorgeous lake with it’s 8000 feet snow-covered vulcano on the other side (about 25 miles away). Spectacular, a concert nobody will ever forget! Although we were pretty busy practising and rehearsing, we did manage to eat some amazing food, especially cakes, jump into the lake and take some refreshing walks through the forest there – paradise! 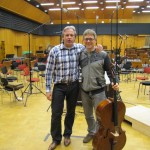 With Markus Stenz after recording of Don Quixotte in Köln

The recording of Don Quixotte before the Chile trip was pretty thrilling for me as I love this piece so much ever since I heard it in my childhood played by the unforgettable Rostropovich. This was his piece, and he set with his bigger-than-life-charisma the tradition of how we see and play the piece today, not always to the benefit of this piece – Don Quixotte was a rather intellectually confused little Spanish nobleman and not a Russian bear. This said I love the way Rostropovich played it, honestly, I still have the entry in my diary of about 30 years ago when I heard it. I was overwhelmed and totally enthused by his performance. But I believe that nobody else should dare to play it like that, because it was his personal conviction, his view of this wonderful work, but a very unique view which should never have become the model of how to play it. And it’s not that he is being copied, but people tend to exaggerate even more until it becomes a caricature. I have no idea if we succeeded in our work, but we did try to cut out some of the misunderstood “traditions”, some of the shmalz and try to get more to the chore of it. Best example is the entire epilog which portrays the beaten Don Quixotte who agreed to become a sheep farmer after loosing the “final battle” against his neighbour who tried to rescue him, but depleted from his confusion he returns home and lies down in his bed “to never get up again” – he is dying, and his life passes before his eyes, incredibly touching and deep, but not really shmalz. Often cellists start the epilog so incredibly slow that they get stuck in the middle and have to speed up once he is actually about to die; they have to inject some energy because they had died too soon.

Or the famous variation with the entire cellogroup – he is waiting in front of his armour to be knighted, thinking about what it means to become a knight, but also about life in general.It’s almost philosophical, but never really kitsch, or that is at least what I believe. The conductor Markus Stenz whom I became very friendly with over the past 7 years shared my view, and I hope we can present a Don Quixotte which is not only well put together (he worked them soooo well), but also breathes the air of La Mancha and is more in the spirit of this Spanish nobleman who had read one too many novels about knights. Recording engineer was, as always when I record for Hyperion, Andrew Keener, whom I will meet again next month when I will sit down and record Britten’s Cellosymphony, another one of Rostropovich’s “property”, and another piece I hope to play rather differently to the greatest performer in the history of the cello.