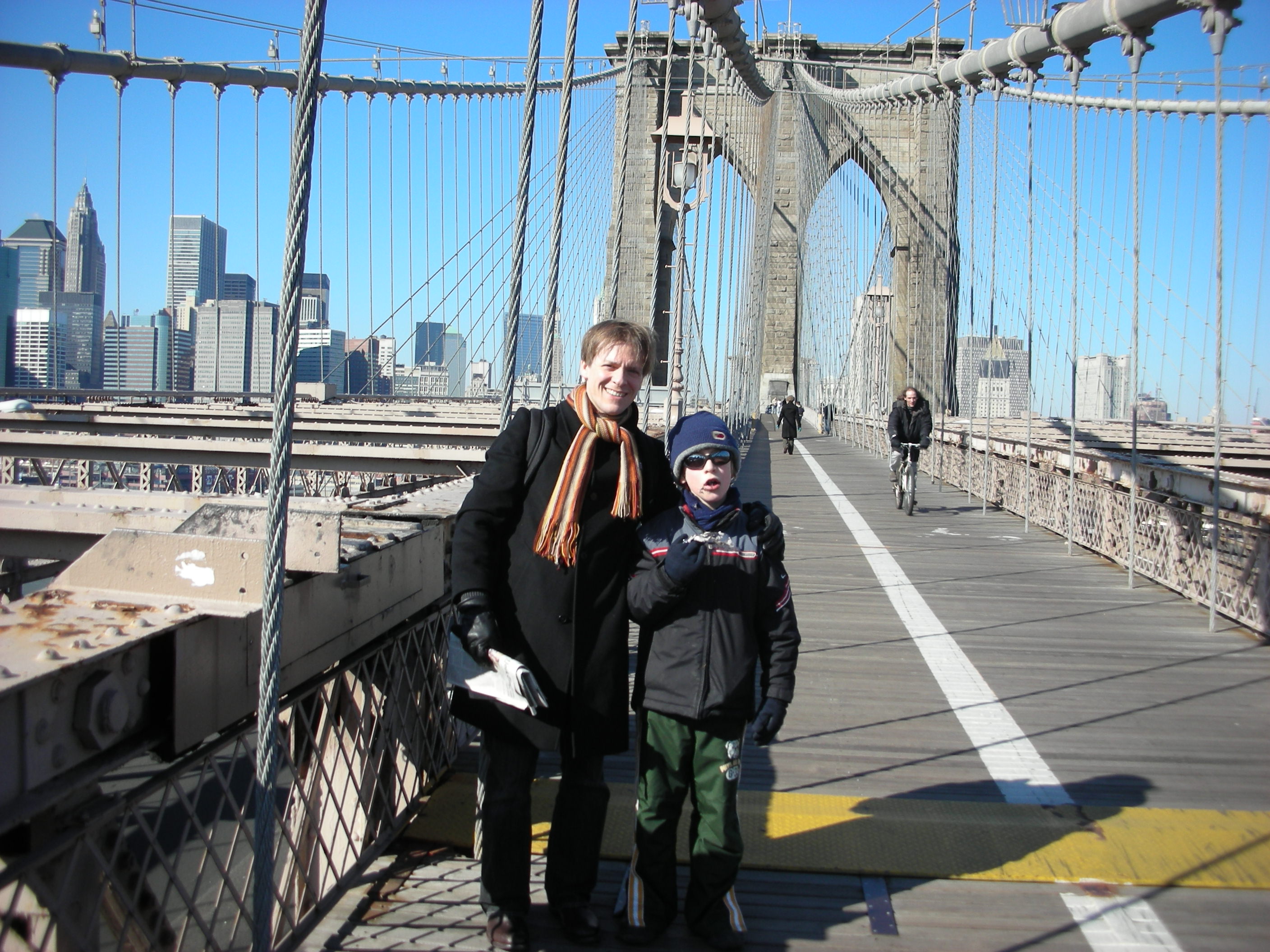 Actually I should be practising, but somehow since I have nothing else to do today, I am postponing the start of my urgently needed practise session until the afternoon and rather have a superlate breakfeast at Starbucks together with my favorite toy, the Macbook, looking onto Broadway and 63rd Street. The last 9 days have been rather exciting, and I am in need of a little breather.The much-anticipated Carnegie-Hall concert went well, at least the people who attended it seemed content, and even the almighty New York Times had something nice to say. But what made me really happy was the fact that I had managed to convince myself that this was just another concert, and so I actually very much enjoyed my time on stage playing the Brahms Double and this new, very touching and melodic piece by Osvaldo Golijov. Only after the concert I found out that it was a live-radio-broadcast – good, because knowing that beforehand might have spoilt the fun…

My son Janos and hiw mother arrived the day of the concert, made it to the concert but had to leave before the Golijov because Janos collapsed of fatigue, poor thing. Knowing them in the audience just put everything in perspective for me though: the priorities became so obvious to me – this “little” child is just so much more important than any gig at any stage in the world. Knowing this makes me much stronger as performer and person, because I know I have a good reason to be on this planet, I don’t have to justify it by bein succesfull. What is important is not music, not success, not career, but bringing up this child as good as I can . Why then getting nervous to play nice music? No reason whatsoever 🙂

The exciting part of our New York stay started afterwards: the day after the concert, Janos and me moved from the hotel where I had spent the days before into the gorgeous guest-apartment of our good old friend Annaliese. Cecile Licad and me did a little houseconcert as warm up for our recital last night in Baltimore, and then I spend 6 days of being a tourist in New York City with my little boy. Highlights? Many – my wonderful friend Paul took us out twice to some amazing restaurants (he is a really gourmet and very generous) and we spend some quality time togehter. Then we did touristy things like Empire State Building, Statue of Liberty, Central Park Zoo, Natural History Museum, “Manon Lescaut” at the Met”, “Fuerzabruta” (crazy but very creative show downtown), Madame Tussaud and just walking around.

They left just in time for me having to get back into shape for this recital last night in Baltimore where Cecile and me played two Beethovens, Janacek and Chopin. It’s such a challenge and fullfillment to play with this woman – she really creates music in the moment, you can take nothing for granted, be prepared for constant musical surprises being thrown at you; well, just the way musicmaking should be. The audience was amazing, almost 900 people showed up inspite of the Superbowl going on at the same time. Yes, I announced the scores in between pieces to the people, the least thing I can do for these brave listeners. Again I have no idea how “good” it was we did, but it felt incredibly honest and real. Technical imperfections are just unavoidable, two, three places where I reacted to slowly to some amazing musical idea Cecile had – I am curious to listen to the recording they made at the same time.

The organizer took us out for dinner afterwards, and I ended up sitting next not only to my friend Bob (from Maryland), but the daughter of my all-time heroe Gregor Piatigorsky. Wow, what an honour, I adore this man, his book “My cello and me” is the best autobiography I have ever read, with so much love for music and a great sense of humour. And she herself has the most wonderful personality; very beautiful, tall lady with so much natural style – it was the crowning of a very nice evening. Later, on our drive back to New York (Cecile boyfriend Jeff drove – lucky us, because the wine in the restaurant was excellent!) we found out that the Giants had won the Superbowl, so back in NY I watched the highlights until 4 am. I know, silly me, but I still feel a lot like New Yorker, even though I had left 7 years ago. But I still follow the sport-teams of this great city, even went to a Knicks game with my German manager Markus who also came to NY to hear me at Carnegie. Since Sep 11 no New York team has won anything, so I think this one is highly deserved!