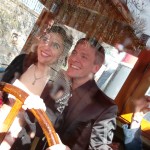 My last blog entry came only minutes before I had to rush off to the registry in Berlin Mitte to get married to the love of my life with the beautiful and equally brilliant name Gergana Georgieva Gergova-Gerhardt. So much Ger in Germany, who could come up with anything like it?!

The wedding itself was an unbelievably memorable experience eveb for, as I have been told, our guests (well, they have to say that, I guess, but it sounded surprisingly sincere :)). About fourty friends (mainly the ones who had travelled far) and family members had made it to the registry in the early afternoon, and the gentleman who finally married us at around 1:52 pm, stiff as all German officials, gave us some serious advice even though he claimed he wasn’t there to give us any, but as we were surrounded by many of my little nieces and nephews, it had such natural and loving atmosphere that I didn’t even mind that guy. A little reception with a bit of champagne and nibbles followed at the Radialsystem, the place, where I had played all the Bachsuites in July 2010, to kill the time until the departure of a little boat we had chartered to take us on a two and a half hour trip on the Spree River all the way through the center of Berlin to the government district and back, a little sight-seeing tour absolutely worth doing – if it wasn’t for the lousy weather we encountered. A week prior we had almost summer-like temperatures, but on that specific day, March 31 2012, it rained, snowed, and once in a while we even had blue sky and sun, yet freezing cold – a unique experience; at least we got some good photos!

Back at the Radialsystem the party was supposed to start with altogether 80 guests, but my sibblings had not finished the rehearsals for the various performances they had planned. I was a bit nervous because I didn’t know what to expect. My youngest 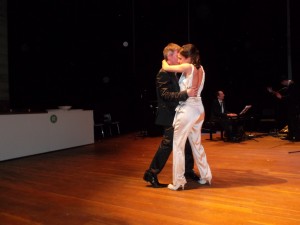 sister Pamina had brilliantly planned the entire wedding, taken all the responsability off our hands, which was such a relief, but as I didn’t want our guests to be pressured into any performances I was afraid that maybe people wouldn’t enjoy themselves, and some geeky little acts would spoil the atmosphere. Far from it. In between the rather delicious appetizers and the main course (unfortunately I forgot the menu) my sister announced the acts, and it couldn’t have been more touching. Somehow singing played the biggest role, maybe because my mother was a singer and couldn’t be there with us?

My rock-musician brother Darius sang a dark and beautiful song composed by my brother-in-law Mathias, a wonderful composer, both performed a self-written melodram together with his two incredibly kids Olga and Elias. Geri’s family together with the two members of her pianotrio played and sang a Bulgarian folksong about the flower Gergana, the two daughters of my sister Manon sang a cute little love song, Ayla accompanying themselves with the guitar, all my siblings with their partners sang a capella a Beatles song I didn’t know, arranged by Mathias, absolutely tear-provokingly touching, and last but not least my friend and pianist Markus Becker, wondering, how it looked in the multi-tasking head of mine, played a quasi improvising piece on the piano by Friedrich Gulda, working into it about 15 different cello titles we had played together – hysterically funny! 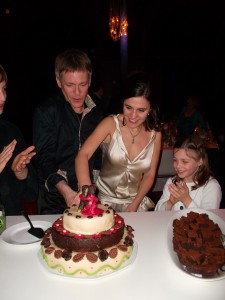 This all passed so quickly, it makes me sad to think about it. It was so moving, the whole evening, including the band which started playing from 11 pm until 1 am – everybody started dancing, even my friend and phenomenal pianist Steven Osborne who hates to dance plus me myself – the worst dancer in the world. While researching for a wedding-band we had spent hours and hours in Myspace and Youtube, but nothing really convinced us totally.
Then one night, driving back home after a concert, I convinced Geri to stop by at this little jazz-club in the neighbourhood where I used to live in Charlottenburg (Berlin), the “A-Trane”. From outside, through the windwo we saw this charismatic African-American lady-singer firing up the crowd. We dared to step inside this completely overcrowded club, and we didn’t regret it for a second. Ingrid Arthur, daughter of one of the “Weather-Girls”, a voice like a vulcano, and spirit like ten of them, soul-singer and one of the best crowd-animators I have ever come across – she was the singer, and after we got home, I looked her up on Facebook, wrote her a message, and a couple of days later we had a deal. She was doing weddings, and I am still glad she did ours, because she ended an at least for me memorable day.I am sitting right now in the lobby of the Crowne Plaza Airport Hotel Manchester, a bit exhausted after a very tiring week of travelling and practising. But everything in order:While I was playing concerts until fourty hours before my wedding (three recitals with composer/pianist Thomas Larcher in London, Heidelberg and Lech, big program including Schumann’s Adagio&Allegro and his “5 Stücke im Volkston”, Debussy Sonata, Arpeggione Sonata and a world premier by Thomas himself), arriving by car at 4 am in the morning of the day before the 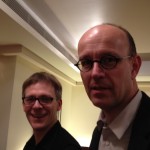 big day, we didn’t have much time after the wedding for our honeymoon. Yes, we did spend four amazing days in Venice, but shortly after our return I flew to New York where I rehearsed with my third piano partner Cecile Licad, who couldn’t make it to the wedding because of her concerts. We had a two days to prepare for a recital in Montreal which took place the day after I played the Rococo Variations in Providence with the Rhode Island Philharmonic under Larry Rachleff. Oh, it is so much easier to perform a concerto with orchestra than playing a full recital: first of all because a piece like the Cesar Franck Sonata is actually musically and technically harder than the Rococo Variations – and then there are three more pieces to play, while the Rococo’s are rather quickly over with. Besides the Franck we performed Brahms F-Major, Adagio&Allegro and me playing the First Bachsuite, but as tiring it might be to get up at 6 in the morning to catch the earliest flight out of Boston in order to get to Montreal in time for a recital at 3:30 pm, it is so fulfilling to live through these two hours with a musician like Cecile who demands the highest attention from a collaborator as she is so full of ideas and inspirations, that she constantly bombards you with new views on how to play a certain passage you might have rehearsed already for hours and hours – during performance. So if you are not on your toes, desaster – if you are, complete fulfillment. Well, after that concert at least I was fulfilled.

Afterwards I spent three “free” days in New York, meeting old friends and managers while practising like an idiot for the upcoming tasks which I just finished more or less succesfully: Another set of Rococo Variations plus “Mariel” by Osvaldo Golijov with the young Portugese conductor Joana Carneiro with the spirited Colorado Symphony in Denver, directly followed by three big concertos I had to play in the last two days here in Manchester (no time for jet-lag): last night, with the Hallé Orchestra and my good friend Markus Stenz Richard Strauss’ Don Quixote as well as Henri Dutilleux’ stunning but tricky “Tout un monde lointain”, and tonight with the same orchestra under Andrew Gourlay in Carlisle the Dvorak Concerto. Piece of cake? Not really, especially when you have mishaps like me right before the concert. Get that: The only rehearsal for this so-called “run-out-concert” we had a 2:30 pm, and between 2:40 and 2:45 I managed to first break my beloved Kittel-bow, and after running during the orchestra interlude to my dressing room to attain my second bow, I miraculously broke that one as well! Absolutely unbelievable, especially as I wasn’t hitting the bow onto the string or anything. I just applied the weight needed to produce the sound I wanted, and somehow it was too much for both my bows… Quite a shock, especially since the Kittel bow broke already before; it had previously been repaired and the bow-maker Gregor Walbrodt, a good friend, had warned me that if it broke again he couldn’t guarantee that he could fix it again. But somehow with age I have gotten more fatalistic, and to prove it, everybody said that the Dvorak sounded as good (or bad) as I always sound. So I decided not to depend on my Kittel bow anymore – I can or can’t play on anything 🙂