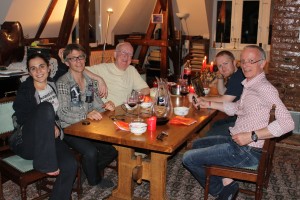 A long season is coming slowly towards an end, playing a recital at one of Germany’s nicest summer festivals, the Rheingau-Musikfestival. Last night was my my fourth concert in 12 years at Schloss Johannisberg, a chateau on top of one of many hilly vineyards with a grand view over the area and a gorgeous concert hall. My good friend Steven Osborne and me met for this one concert the day before in Frankfurt to rehearse a program we had never played in that combination, though each piece was familiar to both of us. Starting with the intense and tiring Schnittke Sonata we went straight into the Brahms e-minor without stopping in between, no chance for the discplined audience to clap which meant the first half was over at 8:55 pm after uninterrupted 50 minutes of music.Why? Well, it’s a short story: When learning the Schnittke about 15 years ago I remember very vividly the beautiful rehearsal space of a friends house in San Diego, overlooking the Pacific Ocean. The sun was about to go down, transforming the room with its stunning early evening light into an almost transcendental place in which I got completely lost in the inspiring beauty of the meditative last movement. It ends with a very long double-stop of the cello, open C string and an artificial harmonic (f sharp) while the piano is winding down – magically and dark. Right into the fragile silence of this ending I softly started the warm but incredibly sad beginning of the Brahms e-minor Sonata, and for the first time in my life I was happy with the calm intensity I achieved with this technically easy but musically very difficult beginning. Somehow the Schnittke ending seemed to have prepared the ground perfectly for the Brahms. My pianist back then, lovely Rina Dokshitsky, with whom I have been sadly out of touch (shame on me!) in the past few years, agreed with me and supported the idea to connect both pieces in our recital program the following day.

Already at the first concert in San Diego this combination exceeded my expectations – audiences not only seemed or claimed to have enjoyed this kind of marathon, but I felt them with me throughout the long stretches of not much happening, their undivided attention proved to me that it works. And yesterday was almost the best of all versions, as the audience was large but highly concentrated. In the second half they only had to listen to the “Fünf Stücke im Volkston” by Schumann and the Britten Sonata, but as encore we had thought of something special and different: we performed the 10 minute middle-movement of the “Quatuor Pour La Fins Du Temps” by O.Messiaen, the “Louange a l’Eternité de Jèsus”, the probably slowest piece for cello ever written. Steven played gorgeously throughout the concert and I tried to keep up – playing a recital is so much harder than playing any concerto with an orchestra, because the piano is an equal partner but has so much more power than the cello. In a way it’s a fight for sheer survival. I love it!

Right now I am on my way back home to Berlin, for two days, before collecting my “boy”, János, who is not really that boyish anymore, taking him to Vail, Colorado where I will have to play the Elgar Concerto with the Philadelphia Orchestra under Stephan Denève, a conductor I have heard lots of great things about, among others from Steven who is raving about him, but whom I have never met yet. Unfortunately we have only 12 days (for some serious white-water-rafting, zip-lining, hiking etc.) over there because I have to be back in time for my first ever “Meisterkurs”, a masterclass stretching over five days, and I am already rather nervous wether I can improve the students over this short stretch or at least inspire them in one way or the other.

The past few weeks were rather exhausting for me because of some reason I had the strange idea of recording all orchestral works with cello by Hans Pfitzner. Partly great, partly really bizarre music, and as always I learnt every single piece just for that recording, and in order to know it inside out I forced myself to memorize his three concertos as well as the duo for violin and cello for which I managed to convince my wife Geri to join me. We did it in Berlin with the RSB and wonderful Sebastian Weigle who is mainly an opera conductor but whom I heard do the best pictures of an exhibition ever; every single movement of this guy have a direct effect on the orchestra, and besides being a very good musician he just knows what he is doing with his hands, his arms – his entire body-language is so clear that orchestras get very inspired and tend to play their best for him.

The sessions were pretty succesful and I am hopeful that the product will be good enough to prove the point that these works inspite of their not too popular creator are worth listening to. But the build-up towards these sessions was pretty difficult for me: I had two weeks to learn them from middle of May until I went with Geri to the Heimbach Festival where both of us played for 10 days tons of chambermusic with such wonderful musicians like Lars Vogt, Christian Tetzlaff, Steven Isserlis and Isabell Faust. And in such inspiring surroundings it is hard to focus on something different but the music being performed there. Right afterwards I flew for three days to Chicago to open the season of the Grant Park Music Festival with my long time friend Carlos Kalmar and his “band”. We played in Frank Gehry’s amazing Pritzker Pavillon which was packed with about 11.000 people (it’s an outdoor venue right in the middle of Chicago) an Elgar Concerto which went incredibly well until a couple of minutes before the end when I had the probably worst black-out in a piece I know reall well; for 15 seconds I just moved my fingers up and down the finger-board without playing a single note Elgar had intended. And this happened after I played a performance which felt so perfect and “right” that I couldn’t believe it was happening – radio live broadcast of all things. Well, I survived it, people pretended they liked it, and I guess worse things can happen, but in the moment of that desaster 15 seconds do feel like an eternity, and I felt deeply ashamed of having let down my friend who trusted me to play his season opener with him… Funny thing was that it felt musically like a rather profound performance, also the very end, the gorgeous coda, felt as if all these people held their breath – maybe they were just waiting for me to get lost again 🙂

When searching for the reason why this happened I came to the only conclusion that it was Hans Pfitzners fault; because of all these Pfitzner notes flying through my head I had lost a couple of Elgar notes and wasn’t quick and cool enough to find them in time in order to jump right back onto the horse. Yes, it is a cheap excuse, but I was very well prepared for that concert, had practised the Elgar even more than usually, because I know how hard it can be to play an outdoor venue; lots of distracting noises, the bright sunlight not really helpful to create this kind of special concert atmosphere, neither the fact that people are picknicking while you are doing some deep soul-searching.

A propos soul-searching: a couple of hours before my rehearsal with Steven in Frankfurt two days ago, I did a two-hour radio-interview with a very well-prepared lady (Dr. Beinhorn) who had also asked some critical questions, among others why I felt it was appropriate to write such personal things onto my blog. Couple of years ago I had already written about it, and I forgot the conclusion, but in that interview my conclusion was that since I open (and I know, it sounds silly, but this is what it is) my most inner feelings, let’s call it soul, every single concert, it doesn’t feel like anything to write something personal into a blog. At the end, during my performances, I show much more from my soul than I have ever shown in any of my poor writing…