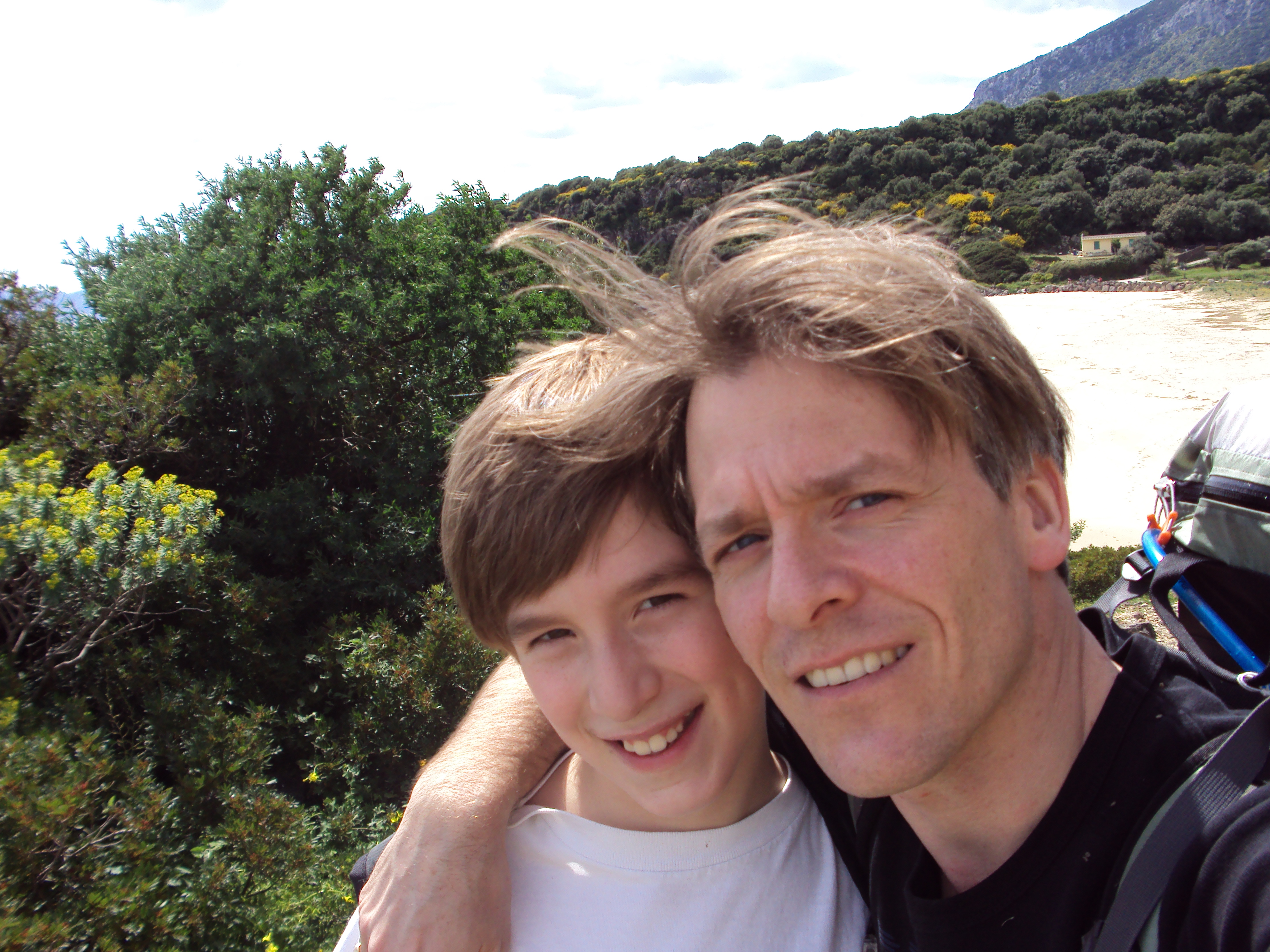 If you have ever wondered what to do in a free week – go to Sardinia! After a “quickie” in Geneva (arrival Thursday evening, rehearsal and concert on Friday, back home on Saturday morning), playing the Schumann Concerto with Marek Janowski and the Orchestre Suisse Romande (by the way, probably the best Schumann I have played so far, it felt so free and spontaneous that even Maestro, who normally doesn’t give compliments, seemed happy with my interpretation afterwards :)) I had Sunday to repack before leaving from Berlin to Olbia on Monday. Easter holidays for my son and two weeks no concerts for me looked like an invitation to book some special father-son-holiday.Oh, and we got lucky. Not only the Agriturismo which I found after a bit of research proved charming, but the area, the Eastcoast of Sardinia, near Nuoro, is exceptionally beautiful, and the weather spectacular; a bit fresh, but sunny and stabil. An “agriturismo” is the opposite of mass tourism. These are in general old farms, financially supported by the government, and some of them still produce some kind of agricultural goods – wine, olive oil, vegetables, some animals -Â  and use them for the home-cooked meals after local recipies, absolutely delicious. Old stables have been changed into very cozy guesthouses, and in our case it feels very remote, calm and relaxing to even just sit on the little terrace and write a bit of blog.

Since his mother is choosing to go separate ways I am very happy to spend real quality time with JÃ¡nos who is growing quickly into a young man with his 11 years, quite exceptional. And he is open to all kinds of activities I am throwing at him: on our first day we went on a massive hike, driving the car into the middle of nowhere to make our way through some rough terrain for almost three hours until we found this gorgeous hidden beach (Cala Luna) which is only accessible by sea or this complicated hike. On the way there we ran into some curious situations, meeting face to face with some horned cows (ox?) and goats, of which we weren’t sure how they would react when we wanted to pass. Stick and 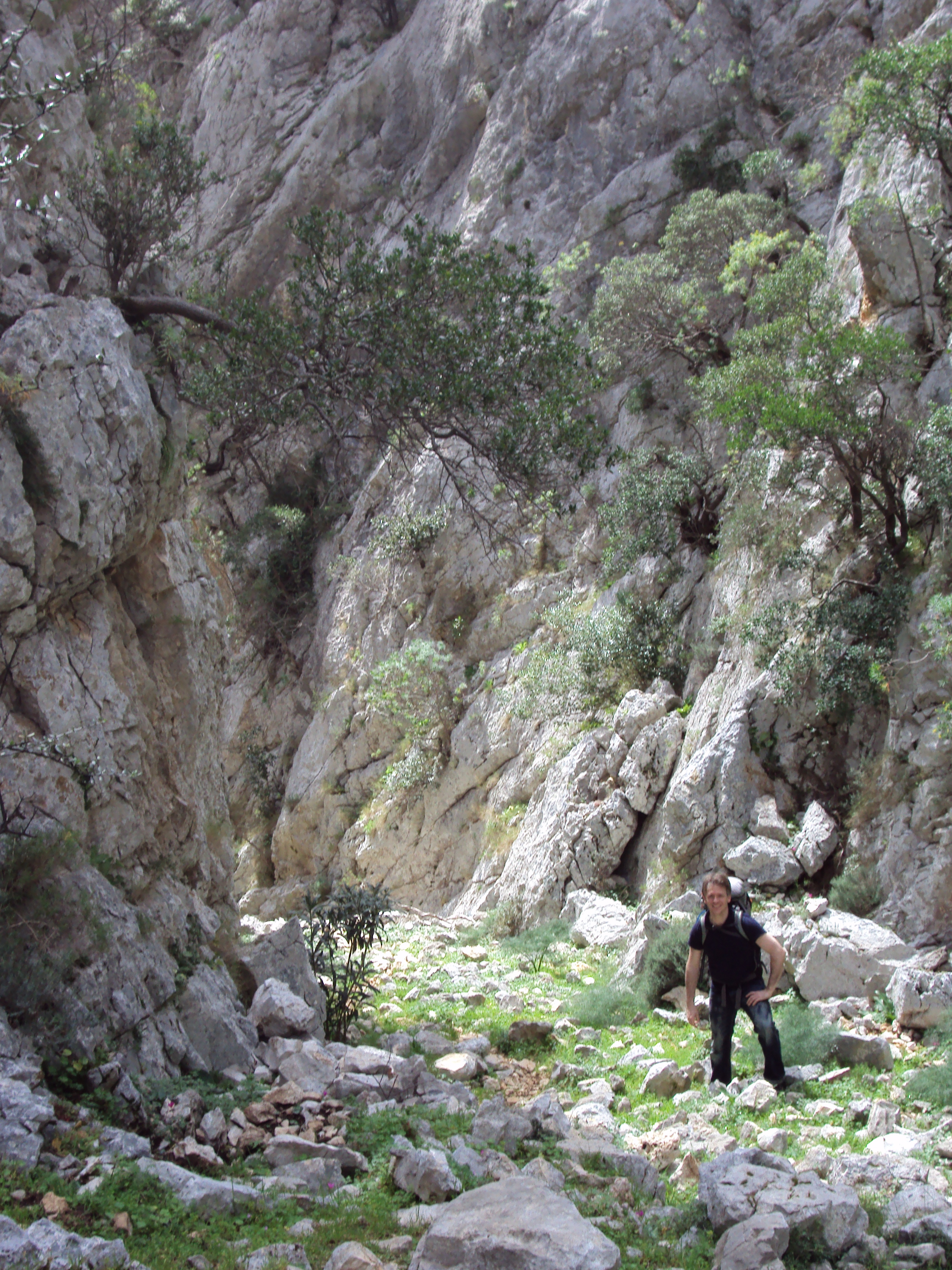 stones in our hands we moved slowly past them, but they didn’t really care – still for us city-people it was quite interestingâ€¦

The next day we drove to the dripstone cave of Ispinigoli which goes 120 meters deep into the ground, but “only” 60 m accessible for the general public. This was enough to see the biggest stalagmite of Europe standing 38 impressive meters tall, a column made by nature within this cave which rather looked like a cathedral from another planet. Another beach visit with some serious soccer playing and novel reading completed that excursion. In the evening our host Antonella always fed us rich and delicious dinners, absolutely to die for.

A canoe trip exhausted us on day three, paddeling inside a canyon for hours until we found this tiny little island on which we had another reading- and card-playing-session, pretending to be the first people on this lovely little place. Further down the river we did a bit of free-climbing since we didn’t want to be the only people on Sardinia not climbing at all (we met sooo many climbers, you have no idea). For very litte money we rented the day after an inflatable motorboat which carried 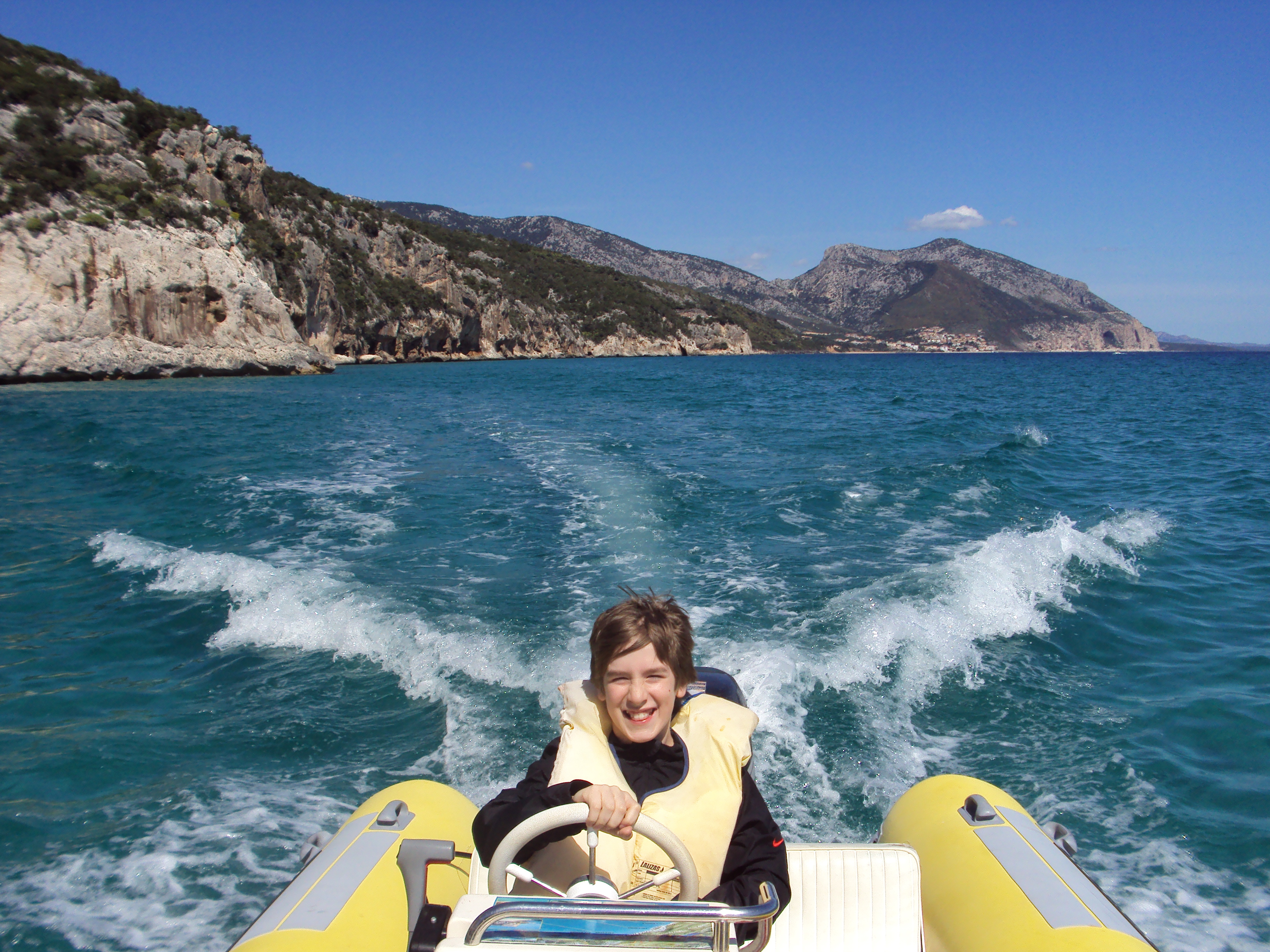 us for five hours down the stunning coast line of the bay of Orosei, with its tons of recluded beaches, one more beautiful than the other. The turquoise waters, the expressive stone formations and the wonderful breeze made this trip one of the most unforgettable days, Janos driving the boat at high speed (40 horsepower provides enough strength to actually use a boat like that for waterskiing!), feeling the excitement of driving an engine for the first time in his young life.
Yesterday we did another hike up the mountain near Oliena, perked up with some free-climbing up a real nice wall, scary at moments, but what a feeling when you overcome the fear and the adrenalin rushes, and once you arrive at the peak, endorphines flowing like crazy so that you want to do it right again. We didn’t, because as a father I didn’t want to overuse the luck that nothing had happenedâ€¦ Later that day we went to a horse farm to learn how to ride a horse, and the good news is, we didn’t fall and the teachers pretended we could still become champions one day 🙂 My butt still hurts from that 90 minutes sitting on a horse and trying to master the trott, which isn’t as easy as it looks on TV I must admit. But the surroundings with nature and wild mountains in the evening sun were so spectacular that we didn’t mind at all not really moving up to the next level of galopping through the forests of Sardinia 🙂

Today, our last day, we attended the very picturesque Easter procession in Oliena (women and men in traditional Sardish costumes), unfortunately spoilt by thousands of gunshots which strangely belong to the tradition – such brutal noise, I had no idea and still don’t understand how people could stand it without their fingers in the ears. The service in the little church afterwards, still interrupted by gunfire, was rather touching, with an excellent choir singing “a capella”, at the end even some Gesualdo, I believe. We’ll finish our trip rather lazily, reading, playing and talking, but I can’t wait for the next long trip to Asia in August when I have to play a couple of concerts with the Asian Youth orchestra in Hong Kong and Seoul, and JÃ¡nos will accompany me, his first time in China and Korea, trying to extend his horizon while having some serious fun!