I had promised myself to start writing more often again but couldn’t keep my own promise. Also I wanted to loose weight and learn Bulgarian which I haven’t managed. Self-discipline, the highest virtue for me because I have so little of it, and the happier I am the more difficult it seems to “stick to the plan”. What to do? Be unhappy and self-disciplined? Not raise the bar up too high? Or just take little steps and do one thing at the time? Yes, this is what I am doing right now; instead of practicing for next week’s duo-concerts with my fiancÃ©e in Cologne and Hamburg I start writing this blog entry in my hotel room in the city of Portland!

Six performances of Prokofiev’s Cellosymphony within four weeks, last month in Stuttgart two with Thomas Dausgaard and the Radio Orchestra there, and four here in Portland with my good friend Carlos Kalmar and his excellent “band”. Few years ago I had recorded that piece, and getting a chance to play it several times in a row is rather exciting – the more I play it the more I love it, a clear sign of a good piece. Already the performances in Stuttgart were fulfilling, I felt I had played better than on the recording, more passionate, more emotional, and technically not too bad either, except the fact that I broke another A-string as I did during the Shostakovich few weeks before that at the cellofestival in Kronberg. Each time it was with radio broadcast, and each time I felt that I didn’t want to bore the audience by me disappearing to change the string, so I took the principal cellist’s instrument and continued. For the Shostakovich I had only 2 more minutes to go, so it made great sense to do so, even though the cello wasn’t any good, but for the Prokofiev I hated myself for having done the same as the mishap took place during the second movement, and I still had about 20 minutes to play quite many notes…

I survived and audiences seem to like when these things happen – besides that I don’t mind making a point that at the end of the day the instrument doesn’t matter so much, that you can get something out of every cello. A good cello is helpful, it inspires you to do better, but at the same time a bad cello can challenge you to work harder which is not a bad side-effect. As I had mentioned in my previous blog which I wrote on my way from Manchester to Kronberg, I had great respect playing there and more so teaching in front of a very knowledgeable crowd, and while the playing was alright, my teaching was really sub-par. Funny, when I get nervous it doesn’t affect my playing much except that the vibrato is getting a bit faster, but for teaching it really has a negative affect. Why? Because I have far more experience performing under pressure than teaching some talented young people in front of an audience which has high expectations.

When I teach my goal is to make the student a better musician or cellist (well, everybody is trying that, I guess…), but to do 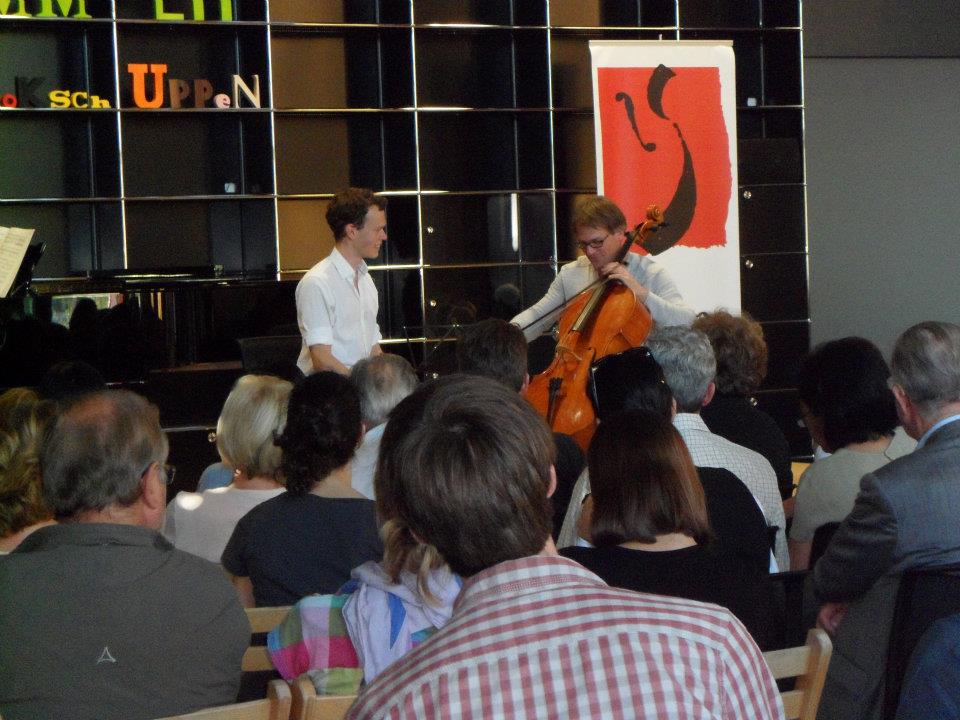 so in front of 200 people in one hour is a difficult task. I try to forget that anybody is watching, try to focus completely on my victim, but in retrospective I must admit that I failed miserably, partly also because I have very little experience giving a masterclass to advanced students. I’ll keep on learning, and maybe next time not in front of an audience…

Overall I had a wonderful time in Kronberg, met many colleagues, old and young, great and greater, and as all cellists, very kind. Yes, we all get along, which is quite amazing; maybe it is because we play an instrument which resembles the human voice, that we are and behave actually human after all.

The most frightening experience there wasn’t the teaching but performing in front of colleagues and two very meaningful widows: the widow of my late teacher Boris Pergamenschikow who housed me during my first big competition in Bonn, and the widow of everybody’s beloved Pablo Casals. These two ladies, Tanja and Marthita, scared the hell out of me, because I can only start imagining how strong their opinions must be concerning other cellists…. 🙂 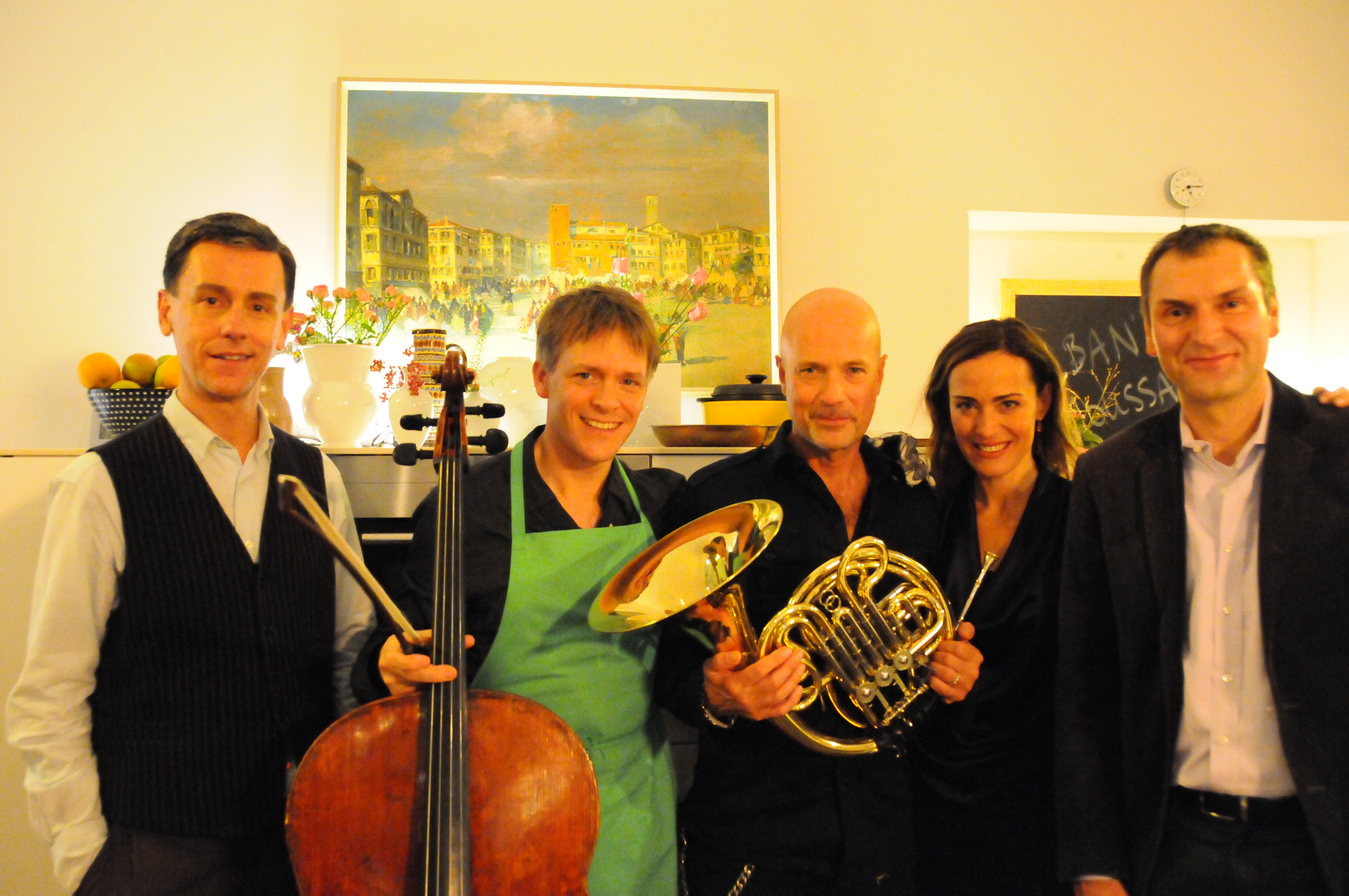 In between Portland and Stuttgart I hopped over to Mexico City to play another Shostakovich No.1 in the beautiful Bellas Artes with the National Orchestra under their chief Carlos Miguel Prieto, and right after I had the pleasure of being the first “victim” of horn-player Sarah Willis from Berlin Philharmonic Orchestra: because she interviewed some uninterviewable musicians for Berlin Phil’s digital concert hall rather brilliantly, one of the producers, Daniel Finkernagel, offered her a TV-cooking show which will be called “Prelude & Food”.

There are enough cooking shows around, I know, but in this case the guests will be all musicians, and that’s a new one. I brought two friends, so-called side-kicks, even though one of them was rather a “main-kick”, actor Christian Berkel who did it in dedication for his mother who adored classical music. I was cooking some Musaka (for the first time in my life, but what can I do, when asked a month before for a recipe, and I normally cook just whatever the fridge has to offer…) while trying to talk about music and outreach activities, playing cello in between – not an easy task when cameras are pointing at you at the same time, and you are supposed to be funny but a serious musician. She was wonderful and we would have had a blast if it wasn’t for the fact that I found out at the end of the show that my beloved US manager Michal Schmidt had just died the day before. 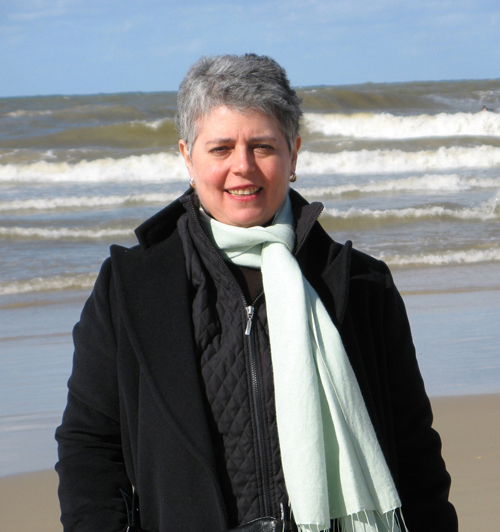 She was one of the warmest, smartest and best educated people in the business, respected by musicians, colleagues and orchestras equally, and she lived only for 54 years, sad and tragic her passing. For her it was all about music and the musicians, money always came last. Sometimes she called me to convince me about the quality of a smaller orchestra and that they would treat me very well, but that they had very little money. Most of her colleagues might not even tell the artists about it but turn it down, but she cared for the survival of classical music and didn’t play the game of pushing the fees higher and higher until the whole system collapses. Not being old at all she was definitely old-school, very private but soooo caring. I miss her horribly.