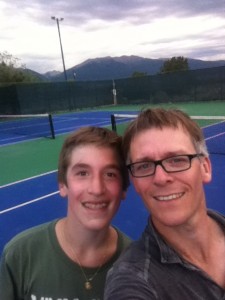 Today I felt the pain of separation in its full strength since quite a while. The profession of a travelling musician makes you get used to being separated from your loved ones and since I have been doing this since more than two decades one should hope I wouldn’t feel the pain as doctors are said to not feel the suffering of their patients nor their deaths. Well, today was different.

The last thirteen days I have spent together with my son János, more or less every of the more than a million seconds, making an already good father-son relationship even stronger. Unlike last summer it was only one concert which brought me over to the US, but again it was a trip to paradise. My good (not so old) friend Anne-Marie McDermott, whom I was incredibly close to during my seven-year stint in New York (1994-2001) and whose musicianship inspired me very much during these years, had invited me to play the Elgar Concerto with the Philadelphia Orchestra under Stéphane Denève at Vail’s “Bravo Colorado” Festival of which has recently been appointed artistic “boss” (administrator sounds so administrative, which she is not at all – hands on musician as she has always been).

Although this invitation was for Friday, the 13th of July, on top of it during a stretch which I had hoped to keep free after playing a recital with Steven Osborne at the Rheingau-Musikfestival, I couldn’t turn down the opportunity to perform with one of the best orchestras in the world, with a conductor about whom I had heard nothing but wonderful things, and last but not least I would have the chance to spend some time with an old friend.
Unfortunately we couldn’t get the direct flight Frankfurt-Denver due to the late booking. We had to travel Last year I had taken Janos for three weeks with me while having to perform altogether six concerts in three different States (Oregon, Tennessee and New York, including the six Bachsuites, all three Britten Suites and the Saint-Saens Concerto) and he had loved it almost as much as me. When I offered him the possibility to join me this summer for a shorter trip but much less work for me, he was excited, and on rather short notice I booked our flights not even a month ago without having planned anything “fun” in advance. But fun we had plenty of!

Berlin-Frankfurt-Philadelphia-Denver, got there in the evening, rented a car and drove the hundred miles to Vail, arriving past midnight. I hadn’t slept all flight, watching movies and chatting with Janos, who at least slept during the car ride. The high altitude didn’t stop us to jump into holiday mode instantly though; after enjoying an a capella men’s choir in the morning, we drove an hour for some zip-lining adventure, racing back and fourth over one of these rough canyons we only know from Wild West movies. Although I have been travelling now for such a long time I can’t stop being amazed by the speed in which we travel, how quickly you change scenery: one morning you get up in your bed in such a European town like Berlin, the next day you are eating a delicious Chile con carne for lunch on a Ranch with the view of nothing but the gorgeous outline of the Rocky Mountains, high up at 3000 meters.

The same evening we listened to a beautiful concert of the festival at an amazing private home (yes, János also doesn’t suffer jetlag :)) before falling into one of these very well-deserved sleeps out of which you awake without knowing where you are. No, I won’t bore you with exact details of every day’s adventures, but rest assured, we had a blast with White Water Rafting (three times, best at Piney Creek, a class V rated portion of the Arkansas River), riding a tandem, going mountain biking (taking the gondola up the hill and then, lazy as we are, going downhill, not an easy taks though for us who had never mountain-biked before…), hiking the Rockies, learning how to climb and repel steep cliffs (with belaying each other, quite a trust-building exercise I must admit), playing tennis for hours and hours and on our way back home spending a full day (8 hours) under the blazing sun (above 100 degrees Fahrenheit) of Denver at the US’ biggest Waterpark (almost free-fall waterslides, never felt such a rush of adrenalin before!).

That was yesterday – now I am on my way via Philadelphia and Munich back to Berlin while I János is on his flight via Atlanta to visit his grandmother and more importantly some pretty cool girls in Puerto Rico. I had to collect all my emotional strength to not start crying when I kissed and hugged him good-bye, seeing him walk down the gangway. Oh no, I am not at all afraid something to happen to him, I just cherished every moment of this intense father-son experience which I never had with my own father and which I know will come to an end as this boy grows rather quickly into a young man (he reached my – not too impressive – height already!).

Did I forget to mention something? Oh yes, I played some music as well, and even though it might not appear like it as so many beautiful things have happened since, it was a rather memorable experience. At Vail they have this impressive open-air amphitheatre named after former president Gerald Ford, obviously with a roof over stage and seats, but also with a lawn, like at Chicago’s Grant Park Festival, and pretty good acoustics (Americans just know how to amplify classical music!) – and I was impressed how dedicated the Philadelphia orchestra approached this single concert with just one rehearsal, how deeply-felt Shostakovich’s 5th Symphony managed to even spell-bind poor tired little János (from too much fun during the day), and also the Elgar was accompanied with the outmost care. I had met Stéphane, the conductor, for the first time in my life the day before, just to talk about the piece, and both of us were very relieved to realize that the other preferred Elgar’s indications over what tradition has done with that piece. And I am happy to announce that this time I didn’t get lost, inspite (or because?) of not really having put all my focus on that performance but on the happiness of my son.

In Berlin I will have five hours to un- and repack until I have to take a train to Weimar, where I will give my first ever so-called “Meisterkurs”  the next morning. I hope I won’t fall asleep during the lessons… At least I will see my beloved wife a day later who is joining me in Goethe’s, Schiller’s and Liszt’s city, before we go to Switzerland to play a little concert and do some serious hiking!