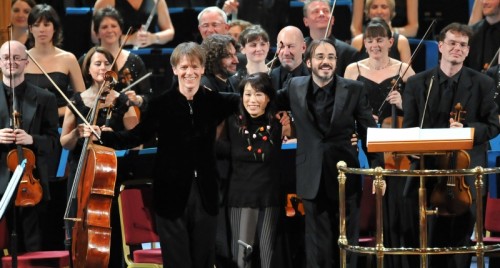 I promise I really wanted to write my freshest memories from the world premier of Unsuk Chins Celloconcerto – and what happened? Nada, niente, nothing but hot air! Laziest cellist in the world has nothing to say anymore, even though there were enough emotions flowing I would have liked to capture in the aftermath. Big difference: normally I am alone after a performance, and the trip back home or to the next engagement has lots of empty time which I often fill with writing e-mails and blog. This time my little family came over to London to hear what all the work in Puerto Rico had been about. Besides that they love the Proms and didn’t want to miss my second one within 12 months (I got to play Prokofiev’s Sinfonia Concertante August 2008 after the Chin premier got postponed). But with my son and wife around I didn’t have a free second afterwards, especially since we had planned a mini-trip to Italy and Croatia right after the concert.

Long story for a cheap excuse for waiting more than a week to write about one of the scariest concerts of my life: performing a piece I had never 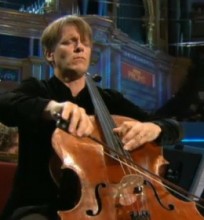 heard before, more difficult than anything I have done before, with rehearsals four days prior (which meant no real “routine” either with help of an extended rehearsal period, in the biggest “arena” in the world, the Royal Albert Hall, and, besides the obligatory live radio and internet broadcast a live TV one (also a first for me). Lucky enough I was so nervous for just getting the piece right that I completely forgot the stakes during the performance. Trying to bring the many musical layers out while not getting lost I had no energy to actually worry about neither the expectation of the promers standing right in front of me nor the pressure of a live-tv thingy which normally would have driven me crazy.

How did the performance finally come out? To be honest, I felt best about the first and third movement (which are also musically the deeper and more beautiful once) – in the quick ones (No.2 and 4) I admit of not having been as much on top of it as I liked; I am fully aware of that I shouldn’t even mention anything like that, but what is the sense of writing in a kind-of-diary-blog how brilliant everything is if this wasn’t true? Who would lie to his own diary? To look good? I am a louzy lier, and if my intention is indeed to bring a bit more honesty and truthfulness to the presentation of classical music by writing rather intimately, I guess I should not hide my short-comings. Well, normally you wouldn’t be able to hear wrong notes without following the score, and I assure you, I played 95% what I was supposed to play, just one for me crucial place, about 30 seconds long, I had a blackout and I panicked.

Probably not even a minute into the last movement I missed an empty bar, realized it immediately, but since the pulse and the speed were very high and because of the constantly changing metrum there was nothing

to hold on to, I had to give up on my request to bring this in my opinion highly effective and beautiful sequence to its full potential and started to fill the gap until I knew, about 30 seconds and probably 40 bars later, were I had to arrive with my big g-sharp (what else, the concerto grows out of a g-sharp, there it came to my rescue) entrance note, end of a nightmarish struggle of not embarrassing myself and my poor son for having stopped in the middle of a life performance. Yes, I could have used my part, but I think I might have gotten lost as well, especially since it was no memory slip but I fell off the train and didn’t manage to hop on at the exact right place.

You might not believe me, but I was deeply ashamed, actually very angry at myself for having missed the opportunity of a perfect performance, and even Unsuk’s assurance that she was more than happy with the result didn’t help to sooth my own disappointment in myself. Ilan Volkov, who led the really brilliantly playing orchestra and being a great partner in crime, promised me that it was no problem and that the overall performance was so convincing that this little mishap didn’t matter, but it took until now that I was cross with myself. I am just lucky that I am not a Formula 1 driver, who, if loosing concentration for a tenth of a second, could get himself killed – I just missed a couple of notes, and maybe it even added to the excitment; one day I will look at the DVD and pee my pants in retrospective re-living this half-minute of nightmarish fear…

The time in Italy and Croatia was absolutely lovely, beautiful little family holiday. We flew first to Napoli, visited the Madre Museum, in which my sister Pamina had organised an exhibition about an Italian painter, and drove right after to San Giovanni Rotondo, where my dear catholic wife wanted to see Padre Pio, a saint, who, in order to show the world this miracle, had been taken 40 years after his death out of his grave; amazingly enough this man (born the same date like me, just 82 years before me) was in perfect shape, no decomposition whatsoever. Extraordinary, even though for me, at the end of the day, what matters is the fact that he must have been a very special man, helping people and trying to make the world a better place, never mind if he had was saint, semi-saint or just another ordinary “good man”. He seemed a bit like the male Mother Theresa, very modest, hard-working and helping the life of many other people – didn’t care much about being famous, just doing “his thing”.

After this we drove along the coast towards Bari, took the ferry to Dubrovnik, stayed the a couple of days before driving up the road along the Adriatic Sea towards Split and flew home. For all these who haven’t been to Croatia yet: this is a wonderful, gorgeous country – not cheap, but to see a medieval city like Dubrovnik more or less untouched since 600 years is quite breath-taking. And the road up to Split, winding along the mountains with full view of the deep colours of the sea is something I’ll never forget. Janos and me took some long swims in the pool as well as some daring jumps of the cliffs into the sea, but as much as we enjoy being back home, we miss the colours and the smells of that paradisial place of the world. Definitely a nice reward after all that work I put into the Chin Concerto!