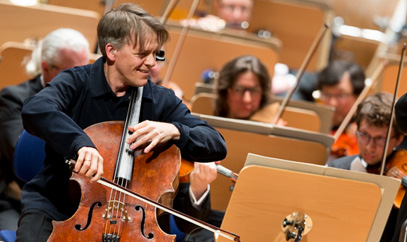 Born now almost five decades ago into a household filled with music, I must say I was lucky enough of not having been pressured at an early age into making music too soon. Instead I heard my mother’s beautiful voice in practice and performance; I jealously interrupted my father’s quartet rehearsals; I heard—as a toddler outside of the church where Karajan always loved to record—all of the sessions for Wagner’s Ring der Nibelungen(perhaps why I’m not his biggest fan!); and I sat through several other operas and concerts of the Berlin Philharmonic Orchestra, of which my father has been a member since 1966.

When I was four years old, my Dad tried to make me play the violin—an experiment which failed miserably not only with me but with all of my four younger sibblings. Frustrated by our father’s perfect command of his instrument, all of us got started with the piano, which I still think is the best way to “meet” music in practice. And one day, my sister Manon had just begun the violin experiment, my mother asked me if I was interested in playing another instrument besides the piano, and “how about the cello?” To get her out of my face, eight-year-old Me agreed, and my mother claims now that she could have named any instrument and I would have taken it on. 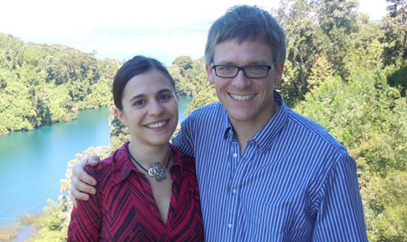 Although I didn’t think so at the time, I must now admit that I was very lucky with the choice of teachers from the very beginning. On the piano as well as on the cello, I had, with Wolfgang Saschowa and Markus Nyikos, two musicians who taught me the basics of my instruments, of practicing, and of music in general. The luckiest part of the beginning of my musicianship was the encouragment of my parents to work independently instead of being my second pair of ears. I was the the opposite of a child prodigy, went to school like everybody else, but I had one very useful talent: I had a excellent concentration which made me inspite of a rather normal intelligence a very good student. I finished Highschool one year early with the goal of being faster able to focus on my two instruments which used up already most of the day. Still I was able to become a big sportsfan (actively as a 1000m-runner with one German Youth-Championship, passively until today a soccer- and basketball-lover) and an obsessive reader of Russian novels (especially Dostoyevsky).

My first public concert happened on Feb.22 1987 in the “Berliner Philharmonie”, playing with an awful little chamber orchestra Haydn’s D major concerto. That means, I was almost 18 playing for the first time with orchestra. Why do I remember this date? I don’t know, perhaps because this day the hockey team of Berlin got into the First Bundesliga? Well, at least my father says now, that the news of this fact made me play better. Sad but true. This concert didn’t change anything in my dreams in wanting to become member of my fathers orchestra. A career as soloists didn’t even tempt me, since I wanted to have children and be a good father, besides the fact that I was not good enough by then. I started my studies in Berlin, went to Cincinnati for a year of intense chambermusic with the LaSalle and Tokyo quartets, and finally found in Boris Pergamenschikov the teacher I needed to improve one of my weaker spots: sound and projection. With his help I improved them and managed to win some competitions, national as well as international, which gave me the chance to start performing on a more regular basis. The national competition provided me with tons of little recital which made me realize that this is what I would love to do. Whatever stage, I loved to be on it and wanted to give the people everything at once, immediately. 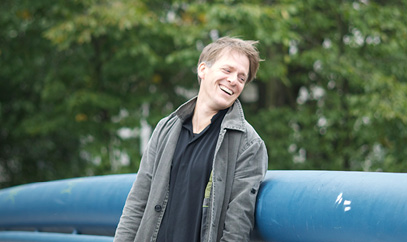 A manager had even taken me on before any “official recognition”, which was rather daring but sweet from this man, and sooner than I could think I was having a little bit of a career. Sooner than planned came as well the big decision if to join an orchestra or not, since the principal cellist of the Berlin Philharmonics was retiring early. My childhood dream was right there, but against my fathers and his colleagues advice I did not take the audition for the job. Not out of arrogance, neither the fear to loose, but rather the knowledge of my own lazyness convinced me that with 23 I was too young to be set up for life. I felt, I could still work much more and continue to try reaching my limits, which moved every day further and further away (they unfortunately still do), but that, once sitting in one of the great orchestras of this world and earning very good money, I would because of my own bad character stop fighting and working on myself. Besides that I had just discovered the joy of this incredible freedom as a free-lancing soloist, and I did not want to give it up sooner than necessary. I got lucky again, won a little bigger competition in the States and moved to New York.

I don’t even care if that helped the thing they call career or not, it just changed my view of many things, my entire way of thinking and playing music. Actually it showed me so clearly, how many totally different ways there are to make music, and that they all have their value, their lovers and their problems. The truth of each piece lays in us, if we manage to bring it to life, if we are honestly trying to tell the audience the story which is behind every piece, or if we just try to impress. And even the “just impressing”-part has a truth to it, because what else did Mozart do all his life than trying to impress some people who were so far below him, and the result is the work of a genius. It’s rather complex I guess, the search for the truth, but since it is such a challenge, it keeps even the 150th performance of a Haydn concerto interesting.

Just a little edit: After the US election 2016 and the Brexit Alban felt the need to become more engaged with what’s going on in the world, so besides taking care and housing an Afghan refugee he also became involved in the musician’s initiative “#Musicians4UnitedEurope” in which musicians try to fill the European vision with feelings instead of just good arguments.  www.musicians4unitedeurope.com