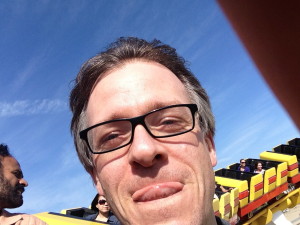 I honestly can’t believe that almost five months have passed since the mishap with my bow (at Washington airport some security person broke it while examining it) and my last “blog” entry. I shouldn’t call it blog anymore, as I have never really been a blogger – much rather a public-diary-writer. The other day I read somewhere that I was even a passionate blogger, and since I absolutely hate being praised for something I am not, I felt at least I should write something within this half-year of silence, although it doesn’t make me passionate whatsoever.

Oh, I am passionate about a lot of things, probably first for my family, then music, then sports (haven’t played tennis in an eternity though, due to a sore right arm from having played ice hockey in February!), reading (books, papers, news) and cooking – but blogging is definitely not part of it. I think in order to be a passionate blogger I would have to take myself much more important, which is hard when you are fully aware of your own unimportance.

Ten days ago I had another chance to perform the Unsuk Chin Concerto in Munich for the 15th time or so, and it struck me once more how small and insignificant performers and conductors are. Yes, with our efforts (or the lack of it) the performance of especially new and unknown repertoire might succeed or fail, but at the end of the day we are just being little re-creators at best, servants to the true masters, the composers. The morning after the performance which happened to be partly a world-premier (Unsuk Chin had re-written the 2nd movement, and it turned out even better indeed!) I had breakfast with her, and I was humbled and ashamed at the same time, that nowadays the real “stars” are performers, not the people who are actually responsible for the creation of all that beautiful music while they have to be almost grateful for being performed at all.

The older I get the more I develop a distaste of us “artists” celebrating ourselves on stage after a performance, violinists after playing the Brahms Concerto, cellists after the highly effective Dvorak Concerto, pianists after a “Rach 3” or Tchaikovsky Concerto, conductors after any of the big symphonies (Brahms, Beethoven, Mahler, Bruckner, you name it) – as if it was due to their ingenuity that the audience goes wild. Well, maybe the “pop strategy” of the music industry today has worked by now so well, that indeed some audiences do react on the sole star status of a performer, never mind if they actually enjoy the piece he is playing or not, but in general, especially after a Rach 3 or a Dvorak Concerto, there will be ovations, and believe me, it does not depend on the quality of the performance.

A conductor told me his worst accompanying story (after I had to improvise for two bars towards the end of Shostakovich’s 2nd Concerto) when a pianist had gone completely lost four times for about 50 bars each in a performance of Rachmaninov’s 3rd concerto – and still received standing ovations at the end, and to top it all, he was taking the applause as if he was the long-awaited hero returning home after winning the most important battle for his country. It was a battle, he had fought against himself and Rachmaninov, which he had lost, but somehow the harmonic and virtuosic attractions of this piece have blinded this audience enough to still go crazy.

Sadly enough it is almost expected today from a top performer/conductor to live the drama of a piece on stage, almost crying and pulling his hair in despair, or laughing and dancing, as everything has turned to be so much more visual and un-subtile. I remember having listened as a child to the likes of Claudio Arrau, Vladimir Horovitz, Emil Gilels and Pierre Fournier, who hardly moved an eyebrow while playing, and who, by all stardom, acted very humble and almost shy on stage, while today the more self-confident a player acts the more chances he has to be appreciated. Visuality must also be the reason that audiences have a much harder time with contemporary music than contemporary art. When the Museum of Modern Art had its few-week-stint in Berlin, people waited for hours in line every day to get a glimpse of something they could not understand better than music written today, as it is mostly abstract and not created for a normal “understanding”. It is more about making impressions, provoking, inspiring feelings or awakening emotions, but in visual arts this seems to work much easier than in music.

One concert-goer in Munich asked me with a doubting undertone what I had understood from the Chin Concerto – obviously he didn’t like it, although the general audiences had reacted very enthusiastic; I tried to explain to him that maybe it wasn’t so much about understanding the work but letting the piece have an effect on you, be open enough and experience whatever this piece of art will do to you – maybe disturbing, maybe uplifting, but definitely never boring.

What else have I done in the past five months? Oh, I have criss-crossed the Atlantic Ocean a couple of times, playing a recital with Cecile Licad in Baltimore which I played on the gorgeous Andrea Guarneri cello from the late David Soyer (it’s for sale!), another time I flew to LA (on my way to Spokane for a performance of the Walton Concerto) to check out the cello of Lynn Harrell which finally he didn’t want to show me after all (yes, I am looking for a real nice cello – suggestions welcome!!), and a third time for Brahms Double Concerto with Arabella Steinbacher and Marek Janowski in the gorgeous city of San Francisco. In between I played a rather nice Schumann concerto in Zürich, Dvorak in Dublin, recorded and performed Shostakovich No.2 in Nürnberg, recorded with young and very talented Josep Caballé-Domenech two Vieuxtemps Concerti and two Ysaye pieces with the Royal Flemish Orchestra in Antwerp (for Hyperion), Britten Cellosymphony in Madrid with my friend Carlos Kalmar who got married the month afterwards – in between Baltimore and San Francisco, my worst two weeks of the year, I flew to Munich to perform the same evening a recital nearby, next morning rehearsal with the Manchester BBC, next day a recital in London (St.Lukes), right afterwards performance in Sheffield, home for a day, and then off to San Francisco. No, not crazy if you remember that I don’t get tired by traveling. I can sleep anywhere, anytime, in any given positiong, and as I am rather short, I don’t even mind doing all that in economy class – and one day at home feels like holidays and I am relaxed for the next tasks.

Right before my birthday end of May I was judging the first (and maybe last) competition of my life. Only three rounds, three days, 16 participants, but what hard work that was. It was the nicest jury imaginable, no bad words, no hidden politics, I can swear on my own hands that nobody tried to push for anything else but what he or she thought was the best. But how do you compare all these different musical personalities with each other? Some where eminently worse than others, but with one fellow I felt so bad as he had clearly not had his best day, acted very nervous, but did some really nice things musically. In the finals there was one cellist who gave it all, took lots of risks but had a few too many technical problems, which I personally didn’t mind, I wanted her to be second, but couldn’t push through the opinion of the non-cellists in the jury. Loved my time there, but don’t need to do it again… 🙂

I had missed the preliminaries because of finally doing my long-planned Bach-in-the-train-station tour, but I will write about this in a different blog, as now my wife is calling me to practice with her for our first Brahms Double Concerto performance which will take place in  5 days in Hamm with the orchestra in which my very first cello-teacher is principal cellist. Only one little problem: she is pregnant, very pregnant, as a matter of fact, by then she will be over-due: first the doctor had said she would be due on June 10 (and as both of us were early as well as my own son we didn’t see a problem for the concert), then it moved to June 18th, and now it is the 26th… 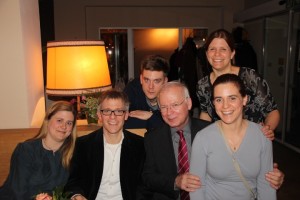 Passionate about family… with my father and my siblings Pamina, Darius, Manon and Cosima (from left to right)

She feels fantastic, sounds even better, so we are pretending it will go as planned; her midwife will accompany us, and we have a very illustrious and wonderful violinst, Baiba Skride, good friend from both of us, ready to stand-in in case our little boy doesn’t want to wait so long. Some people might think this is crazy, but in former times women have worked on the fields, interrupted the work to give birth and continued soon after. Yes, many babies (and mothers) died in the process, but playing the violin is not working on a field, and as long as the doctor says it’s ok, and as long as she feels as brilliantly as she does, why not go for it?! It’s not work, it is for us much rather like breathing and living, it’s joy and pure life – what can be bad about this 🙂