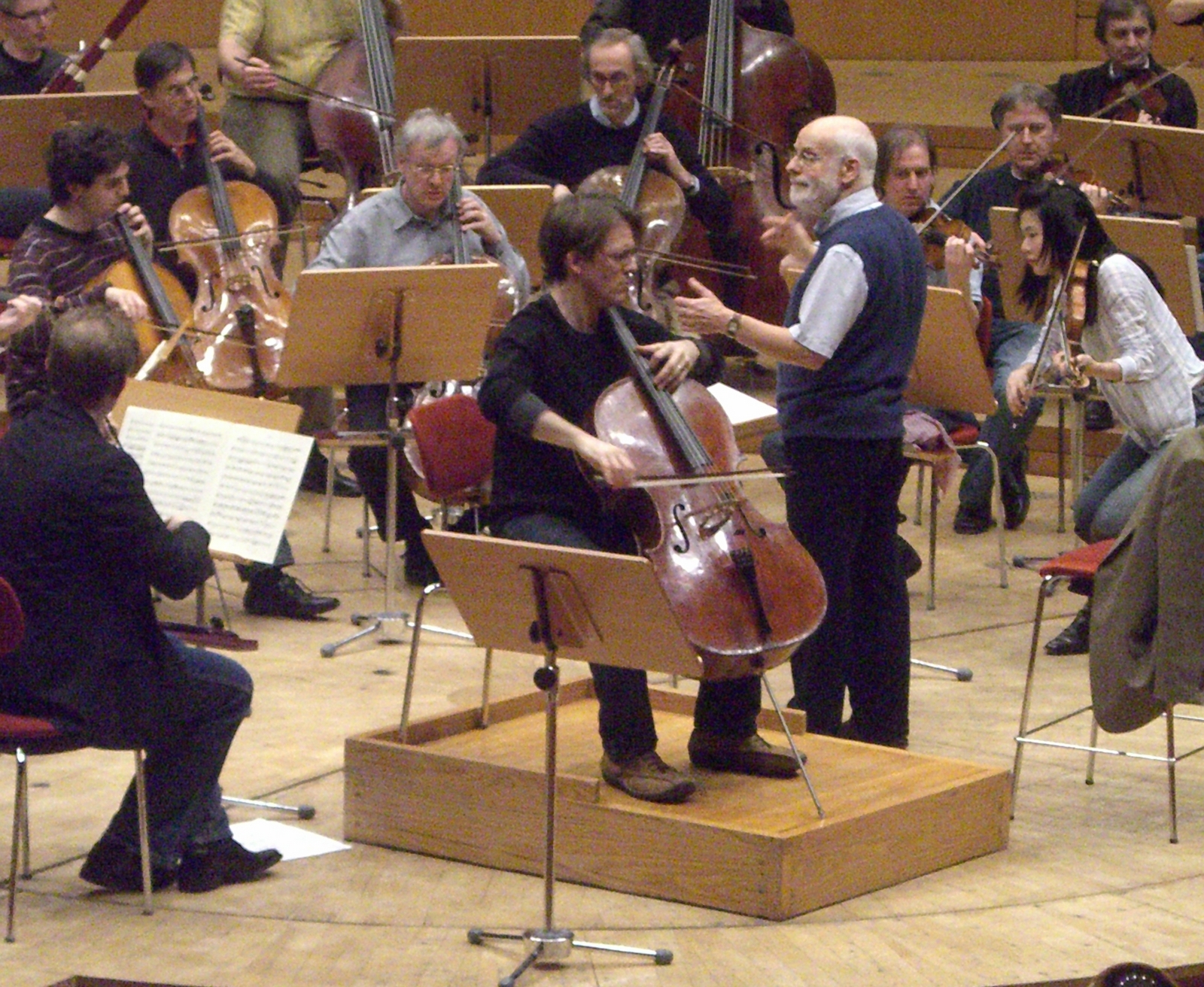 Sitting in trains allows me to write a bit about my performances I am playing these days. Besides quite a range in repertoire (between Jan 13 and Feb 25 I am playing the concerti by Dutilleux, Strauss, Schumann, Lalo, Haydn D, Saint-Saens No.1+2, Beethoven Triple and Dvorak) I have the rare pleasure of working during the next few days together with one of the the specialist of “authentic baroque-music-playing”, Ton Koopman – on the Haydn Concerto in D Major.But first I would like to write about my experience playing in Helsinki last week, the city which is the cradle of so many wonderful conductors and musicians of today. Yes, I was more nervous than normally, because somehow my respect for these Finns is very high. Two days before travelling north I attended the concert of one of Finnland’s finest, Sakari Oramo conducting Berlin Phil, and his Schumann 2nd Symphony was really one of the most gripping and moving peformances of any Schumann Symphony I have heard so far. The “Sturm und Drang”, which is so omni-present in his music came out beautifully without him overdoing it. In Hannu Lintu I had a similarly intense conductor for the Schumann Concerto in Helsinki and even though I haven’t dared to listen to the live-broadcast yet I felt that it was one of the better performances I have given of that piece.

Maybe it was the Helsinki radio orchestra which inspired me, maybe Hannu himself, or perhaps it had to do with me having realized a few hours before the concert that my beloved Kittel bow had a little crack at the tip, right there where it was broken years ago. I had it checked by a luthier around the corner from the hall, and he said he couldn’t guarantee that the bow would make it through the concert. Hannu recommended me not to take the risk especially since it was going to be broadcasted live on air. But since I love living on the edge (and because my substitute bow is just so far worse…), I used my poor little Kittel-bow, and maybe for the first time in my life I wasn’t afraid of the Schumann concerto at all, wasn’t thinking about the musical and technical problems which this piece poses, but my entire focus was on the bow which I didn’t want to break. My pianist Steven Osborne told me recently that performing without “wanting anything” was his dream, and I think I achieved it more or less that day; I didn’t want to play perfect, especially beautiful or special, didn’t want to please anybody, didn’t think of the radio, the audience, the critics, musicians, orchestra, conductor – no, just the bow. And it felt very liberating somehow. Will I from now on always play with the bow on the verge of falling apart? No, not to worry, but I try to find this feeling of not wanting anything except breathing and enjoying the ride.

Two days ago I had my day of punishment: after not having practised for two days (celebrating Janos’ 10th birthday – his mother was in Canada, so I had to do all the present-buying, cake-baking, food-preparing and party-planning on my own, but it’s so much more rewarding than practisingâ€¦) I took the train from Berlin to Cologne, rehearsed there with a smaller version of the Cologne Radio orchestra (WDR) and Ton Koopman the Haydn for good three hours, continued to Wiesbaden to rehearse the Lalo with the local orchestra there, and at the end of the evening I could hardly feel my left arm anymore (well, tennis arm from playing Wii with Janos, my own fault, I know, and now I am paying for itâ€¦). Lalo concerto was yesterday evening in the beautiful Kurhaus in Wiesbaden, and I think we did the piece justice. It’s a tough act to pull off because it is not the world’s greatest concerto, but underneath all the clichÃ©es is hiding a very touching and fragile=introvert piece of music which we tried to bring out. The orchestra collaborated wonderfully, and conductor was young Australian Niclas Milton, great talent, good musician and fun guy to hang out with – orchestra loved him too.

But now, after all that vibrating in the Lalo I will need to cut down seriously especially after Ton Koopman took the time to work with me on articulation, phrasing and also vibrato before we rehearsed day before yesterday. Actually I think this even changed a bit the way I approached the Lalo in the end, being more aware of the amount and also size of vibrato I was using, and obviously now in the Haydn it will be much less. Ton Koopman said something very interesting which made for me even clearer what vibrato actually means. He said that he likes to do trills and ornaments on the cembalo, and he likes it a lot. But you would never dream of putting a trill on every single note – vibrato is almost the same like a trill, it is an ornament, not the general colour of the sound. The problem of many instrumentalists (including me ) is, that in the evening with the adrenalin flowing it becomes very difficult to control the vibrato the way it is meant to be. With nerves the vibrato can become faster or wider (in my case often just faster), with some people it can sound hysterically, so it is much easier to just turn it off completely. Yes, we can forbid our hands to vibrate, but this is not really musically justified. “Back then” they did vibrate, just not, as Ton said, on every single note.

Heinrich Schiff told me already in a masterclass in 1989 that one must not put the vibrato on to a piece like some spaghetti sauce, and guess what: I am still working on that, it is probably a dilemma which is very difficult to solve. As performers we must not appear as being “in control” too much, we are expected to “loose ourselves”. This sounds colder than I mean it, so I try to put it differently: we must allow the music to take us with “her” (in German music is feminin!), we shouldn’t try to dominate the music, we must become the music without getting completely carried away that our fingers do crazy stuff (like vibrating as if we put the hand into an electrical outlet). Oywey, I tell you, while writing this in the train to my dress rehearsal in Cologne which starts in 2 hours, I am getting completely excited and nervous at the same time. Excited because during yesterday’s practice it felt as if I managed to find a good balance of letting go without going crazy, of controlling my vibrato without loosing the depth of the sound nor the passion and emotion which lay in every piece of music there is, sometimes more, sometimes less.